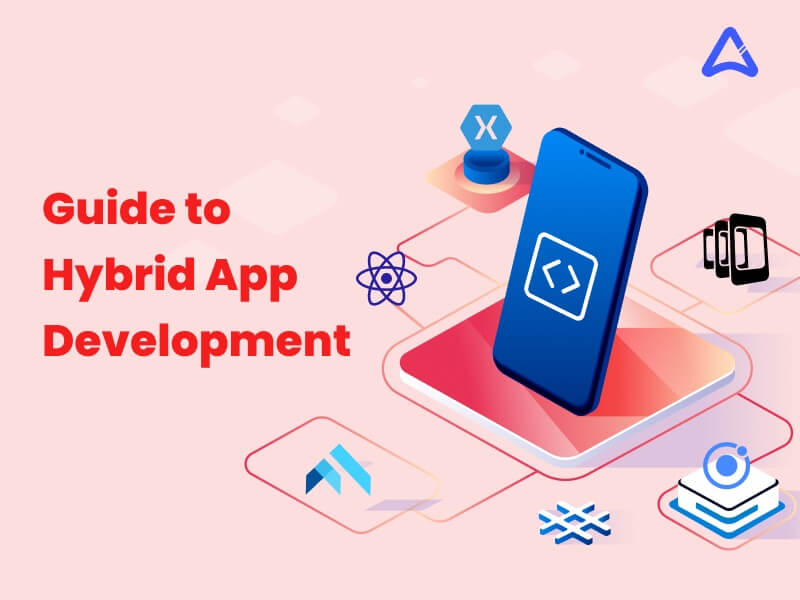 Initiating the mobile app development process may require evaluating factors like your business’ budget, timeline, target audience, and the technical know-how of the developers’ team. Having said that, let’s move on to understand the two top categories of mobile application development that will align your app development goals as per your business type.

Before getting into the intricacies of building a hybrid app, it is vital to understand what native applications are. This will enable you to have a better grasp of the choices and find the right solutions to your mobile application development goals.

What are Native Apps?

A native application is a software program that the developers create on a specific platform or device. For instance, creating a native iOS application would require either Swift or Objective-C for coding and Xcode for compiling. On the other hand, a native android application can be developed by harnessing the power of Kotlin or Java and Android Studio for compilation.

As these applications are built by using the default solutions of the platform, it becomes easier for the developers to have full access to the device’s full capabilities. This may include elements like the user’s address book, the device’s sensors, and the latest technology updates.

What are Hybrid Apps?

As the name suggests hybrid, these apps blend native apps and web applications. Though riskier, hybrid app development is considered more convenient than native app development. Building hybrid applications includes writing code using web programming languages like HTML, CSS, and JavaScript and encapsulating it within a native app. It is possible for hybrid apps to have full accessibility of the mobile device’s features.

A Brief Simplification of How A Hybrid Application Functions:

The steps mentioned above make it clear that the hybrid app is more flexible to use than native applications.

With that being said, let’s move forward with the common tech stacks used in making a hybrid application.

React Native is one of the most favored hybrid app technologies by developers. It is an open-source UI software framework that assists in building applications for multiple platforms like iOS, macOS, tvOS, Android, Android TV, Web, UWP and Windows. The developers can compose a rich mobile hybrid app UI design from the list of declarative components. React Native allows you to build hybrid mobile apps by harnessing the power of Objective-C and Java. By merging React Native and JavaScript, a hybrid application is developed.

Ionic, created by Max Lynch, Ben Sperry and Adam Bradley and first released in March 2014, is an open-source UI toolkit to create high-quality hybrid mobile apps by channelizing the web technologies like HTML, CSS, and JavaScript. This is a popular framework and a software development kit (SDK) based on HTML 5 (the latest version of HTML). Ionic allows developers to conduct hybrid app development and run on any platform. Ionic consists of AngularJs, Apache Cordova plugins, Ionic View, and Ionic command-line interface (CLI).

Apache Cordova, often abridged as ‘Cordova’, is an open-source mobile development framework and a hybrid app UI framework. Cordova settles the web application into a native container with the help of WebView. While Ionic renders a platform-specific UI component for hybrid mobile apps, Cordova binds it together with the other functionalities and solutions required to create a hybrid application.

Visual Studio is an integrated development atmosphere that induces IDE for core editing. Its primary use is the background for building and debugging Ionic apps. In easier terms, Visual Studio could be a canvas to conduct various activities.

Cost-effective: Generally, in native app development, developers build multiple apps for several different platforms; hence the cost is comparatively high. However, hybrid app development ensures a high degree of code shareability. The developers have to write only one set of code, which means the initial development’s cost is low and easy on your pocket.

Highly efficient: Since hybrid app technology stacks function so that only one codebase is required, it becomes obvious that hybrid apps are highly efficient. The code shareability aspect induces platform-friendly features with the support of agile software development.

Scalable: Hybrid applications are easy to scale because of the single codebase. These apps do not involve complexities, even if you want to go bigger in the app development process.

While hybrid apps are beneficial for businesses, in the long run, you can observe some hindrances observed as well. Have a look at some of the disadvantages of hybrid app development:

Unattractive User Interface (UI): The hybrid app UI is not that enticing compared to the native apps that look better. The aesthetic prowess is lower because of the native hardware they run on.

Slow user navigation: Since the UI is weak, it is most likely that the hybrid apps won’t have fast performance because of the WebView they use in android app development. The speed of transitioning between the pages also gets slower.

Testability: Hybrid apps encompass native code, which means each test case would contain an abundance of test scripts. This may create hindrances in the testing processes as well.

Q1. What is hybrid app development?

Q2. Where can I hire hybrid app developers?

AppStudio is your best bet to hire hybrid app developers. We follow agile development procedures and deliver highly scalable and robust digital products that align with your business goals.

Q3. What is the cost of developing a hybrid application?

It totally depends on the nature of your project, size and type of your business. Get in touch with our team to receive a quote.