Hire iOS App Developers To Level Up Your Business 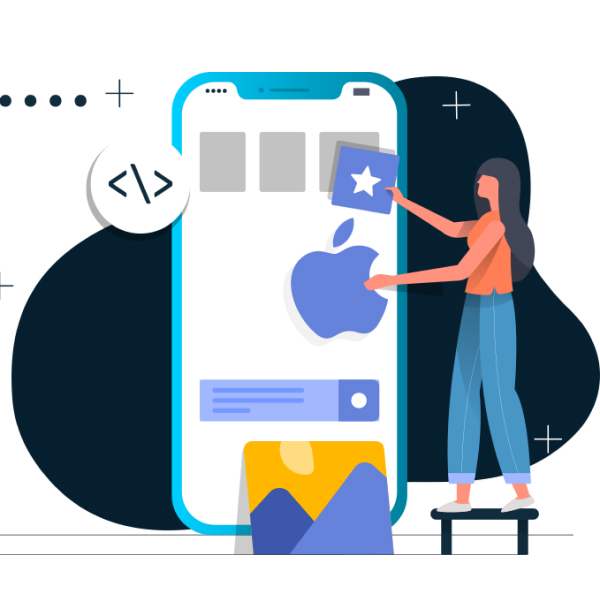 Are you planning to hire dedicated iOS app developers for your business? If so, you’re at the right place. AppStudio is the most renowned name for creating iOS apps. We work with the brightest iOS developers to create flawless applications. As a result, we have delivered some of the most amazing iOS solutions to numerous businesses in Canada with dynamic, scalable and feature-packed iOS apps to upscale their businesses.

Hire an iOS app developer to build an interactive iOS application with robust and up-to-the-minute features and take advantage of it to earmark your potential consumers. Our in-house iOS developers have deep expertise in developing feature-packed and robust iOS apps. Our iOS app developers have shown their mastery and helped businesses to gain a respectable position in the market through the years. So, if you plan to hire dedicated iOS app developers from AppStudio, rest assured your business project is in safe hands.

AppStudio is the most distinguished name when it comes to creating apps for Apple devices as we work with the most outstanding and splendid iOS developers. As the prominent iOS app development company, we are the most trusted and reliable technology partner for some of the big names in the industrial circle of Canada. Employing our expertise in the Swift programming language, our knowledgeable iOS developers have developed top-notch and user-friendly apps for our clients. If you wish to hire iOS developers in Canada, feel free to communicate with AppStudio because you can reap many benefits.

• Seamless User Experience: We work with the best iOS developers in the industry and build iOS apps based on the untarnished grades of cutting-edge hardware and seamless software functionalities. Our iOS developers build apps that never fail to perform steadily on all Apple devices, engaging users and boosting your business.

• Economical and Speedy Development: If you are into business, the foremost thing for you is to get hold of the market as quickly as possible, keeping in mind the budgetary restrictions. By harnessing the power of the Swift programming language, our iOS app developers build apps with the speed of light. Our iOS developers jot down clear-cut codes, thus curbing down the development time for a faster time-to-market at affordable costs.

• Top-Grade Security: At AppStudio, our iOS app developers take security as the prime concern and never compromise with it. We are renowned for our security features. As a result, when you hire iOS app developers from us, we guarantee that your customers get out-and-out protection against third-party threats and interferences.

• Superior Customer Satisfaction: The iOS applications built by our very own iOS developers have a towering record of customer satisfaction. Our iOS developers have helped numerous organizations to upscale their business and also enhanced their functional abilities. Our iOS app developers build robust apps that have the power to boost productivity, resulting in increased sales and profit of your business while catering to the needs of your customers straightaway.

When it comes to iOS app developers for hire, AppStudio is the best bet for organizations. We work with the best iOS app developers and are the most trusted iOS technology partner for numerous organizations. With the strength of the Swift and Objective-C programming language, our iOS developers build state-of-the-art applications to keep businesses a step ahead in the race. We’ve provided our iOS services to several industrial sectors ranging from healthcare to eCommerce, media and entertainment to the fashion industry with pixel-perfect iOS-based apps for a game-changing business experience. If you plan to hire dedicated app developers from AppStudio and want to level up your business operations, waste no time. Do drop in.

At AppStudio, our in-house iOS app developers build fully-featured and secured iPad apps that provide improved and advanced user engagement. We are well aware of the Apple market trends and bring in up-to-the-minute applications. Our proficient iOS developers are well-versed and flexible in using cutting-edge tools and the required technology stack to deliver robust iPad apps to give you a competitive edge in the market.

Being the leading iPhone app development company, we have years of experience and deep expertise in designing and developing iPhone applications with rich UI/UX designs for a seamless and hassle-free experience. Our iOS app developers build all types of applications, be it banking and finance apps or On-demand food delivery apps. At AppStudio, we understand your business needs and goals and sketch out a blueprint using their intelligence to give you the best possible app.

Our iOS developers in Toronto offer cutting-edge Enterprise-based iOS apps for you. Our prime objective is to provide you with high-end services to steer your business forward. Being a growth-driven company, we empower you to run your business smoothly without any hurdles via your iOS devices. Our highly talented iOS enterprise app development team has helped numerous organizations reshape their businesses over the years.

We build interactive and highly engaging games for iOS devices using leading-edge gaming tools and accurate gaming engines. We have proven our mastery in delivering some of the most amazing and creative games for countless companies. Our iOS developers visualize your gaming ideas and transform them into super-duper games with eye-appealing graphics and an unmatched user experience. Hire iOS application developers from us and capitalize on the booming game market.

AppStudio’s custom iOS developers leave no stone unturned to deliver dynamic and future-proof apps for you. No matter if you are a startup or a well-flourished business group, we cover it all. Our apps are scalable, which means they expand along with the heightening of your business. So, without a second thought, hire custom iOS app developers from AppStudio to elevate your business.

Why Should You Hire iOS App Developers from AppStudio?

Well, there are many reasons for you to hire dedicated iOS app developers from AppStudio. Our talented iOS developers have provided iOS-based app development solutions to numerous organizations across the verticals. Our iOS application developers are well-versed and flexible in using high-end tools and leading-edge technology to deliver out-of-the-box iOS apps. So whether you choose us for iOS game development or hire our iOS mobile app developers, we won't disappoint you. Whenever you think of iOS app developers for hire, please think of us. Here’s why.

• Adept iOS Developers: At AppStudio, we house a team of adept and skilful iOS developers who are well-versed and flexible in using advanced and innovative tools and technology to build your application for an unrivalled user experience.

• On-Time Deployment: Our technologically gifted iOS app developers waste no time in building your iOS application. As time is money, our iOS developers deliver your app right on time for a faster time to market.

• Quality Assurance: When you hire dedicated iOS app developers from AppStudio, you should stop worrying about the quality. Before deployment, your app undergoes many testing and security checks on different conditions until we are satisfied.

• Honest Pricing: We believe in the concept of honest pricing. Before starting the app development process, we state down the overall cost that influences your business project. You pay as per your requirements, with no hidden costs.

• Complete Transparency: We maintain 100% transparency with all our clients. We keep our clients updated with the minutest of details of their project and hand over the codes and design once we complete the given project.

• 24/7 Client Assistance: Right from conceptualization to deployment, we keep ourselves available all the time for our respected clients. If you require modification or change in their apps in the future, we are ready to help you without a second thought.

AppStudio - A Strong Team of iOS Developers in Canada

AppStudio has a team of talented and experienced iOS developers in Canada. We've been designing and developing feature-packed iOS apps over the years. Our knowledgeable iOS developers have helped several organizations across the globe by providing strategic iOS solutions. So, if you want to take your business a level forward, hire the best iOS app developers from our team.

How to hire an iOS app developer?+

If you are searching for an iOS app developer for hire, then your search ends right here. At AppStudio, you can easily hire an iOS app developer to build secure and robust iOS apps packed with features. We are the best bet for you as we have the full potential to make your business grow to a huge extent.

What type of iOS apps do you develop?+

Our iOS developers have built some of the most interactive apps ranging from gaming apps to social media apps, fashion and lifestyle to news, etc. We have built flawless and high-end apps for businesses of all sizes.

What tools do you use to develop iOS apps?+

We use many tools for building iOS apps, like Xcode, AppCode, CodeRunner, RxSwift, etc.

We are trusted by brands
you believe in

We build scalable and secure applications for iPhones using cutting-edge technology and our in-depth domain knowledge.